Well the ‘Kats’ out the bag. I can hold it in no more. I am truly in love with Mary Katrantzou! I took my son to the Design Museum today for a touch of innovation inspiration at the Designs of the year 2012 exhibition but didn’t expect to be blown away by a MK dress in the flesh, so to speak.

I didn’t manage to convince the boy-wonder that a dress would have any standing up against a ‘cool’ carbon fibre wheelchair or the ‘sick’ design of an opera house in China or indeed some ‘gotta have’ bluetooth speakers but I did come out of that closet and realise that she, with her gorgeous creations, has been mostly on my mind and in my dreams for at least a year.

It’s such a no brainer to quote Viv, Alexander and JPG as divine inspiration and that is an underestimation. I certainly don’t profess to be a devout follower of designer fashion but when something hits me like this I just get a bit over excited.

Its the all-powerful combination of structure and print, charged up to blow everything else in its path on the catwalk away -package what does it… methinks.

Having dipped my toe into the world of garment construction in an oh-so basic way in just short of a year I am in awe. But at the same time so inspired to challenge myself more. There I was, crying over a welt pocket this afternoon, and now I am all the more determined to master all that there is about design, dressmaking and tailoring for as many years as it takes.

Funnily enough there was an article in the Independent Newspaper yesterday which reported how Primark was ‘copying’ one of her latest designs.

Clever media reporting perhaps? Do you think Mary really cares or is even a little bit worried about the competition? I’m not entirely sure there will be too much confusion! The fashion editor at Grazia thinks its completely ‘shameful’. Purely a timely piece of publicity just before London Fashion week don’t ya think?

I find it really interesting that she separates herself from her work by mostly wearing black and claiming to have a complete lack of print in her own wardrobe! But according to Wiki, and despite how young she is (born 1983), her career so far has been more than colourful:

“She moved to the United States in 2003 in order to attend Rhode Island School of Design to study architecture. She then transferred Central Saint Martins College of Art and Design where she completed both herBachelor and Master. During her studies, she managed to sell some of her prints to Bill Blass. Graduating from her Bachelor course in 2005, Katrantzou switched her focus from prints for interiors to fashion prints. Whilst collaborating with Sophia Kokosalaki in 2006, Katrantzou managed to build up a portfolio for the Central Saint Martins Master Fashion Textiles course. In 2008, she opened the Saint Martins graduating show. Her collection was nominated for the Harrods and the L‘Oreal Professional Award. Supported by a Newgen (talent identification scheme created by the British Fashion Council in 1993) sponsorship for six full seasons (S/S 2009 – A/W 2011), her first Prêt-à-porter collection was shown at the autumn/winter London Fashion Week in 2008.

Her collections are now available worldwide in over 60 high end fashion shops. A collection for Topshop launched for London Fashion Week autumn/winter 2010 and was available in shops in February 2011. Katrantzou‘s work has been featured in publications including Vogue, Dazed & Confused, and Grazia. In 2010, she was awarded the coveted Swiss Textiles award, succeeding Alexander Wang who won the award in 2009. She is one of the designers of Città dell’arte Fashion. Hannah Holman is one of the better known models who recently walked in one of Katrantzou‘s shows.” 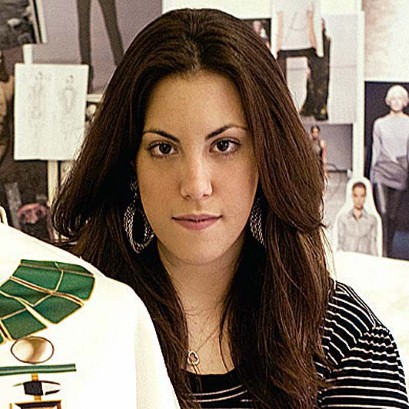 The Mary Katrantzou website is launching soon but you can still download the press book here. It takes a little while to download but is so worth the wait. I hope it opens your eyes as wide as mine and give you as much joy and inspiration as it did me.

Now… on with my jacket!