A few months ago I was asked if I’d make a prom dress for my friend’s daughter. Of course I was delighted to oblige, and honoured and scared but it happened. By some amazing miracle it happened. But I can’t show you just yet. Jessica’s prom is tonight and Fulham’s best kept secret can’t be revealed until she’s all dolled up and ready to rock. Mr Ooobop is at the ready with his camera, don’t you worry!

But what I can show you is the tie I made for princess Jessica’s prince charming. I hope he won’t mind. In fact I hope he likes it. Prince Tom hasn’t seen it yet but I hope it’s a relief and fair competition for all the designer ties he went in search for;-) Designer sort is Tom, by all accounts. He likes his labels. But all the Ralph Laurens and the Guccis of the world couldn’t match the gown. Shame I don’t have an ‘ooobop!’ label at the ready, I’m sure that would have sold him sweeter! 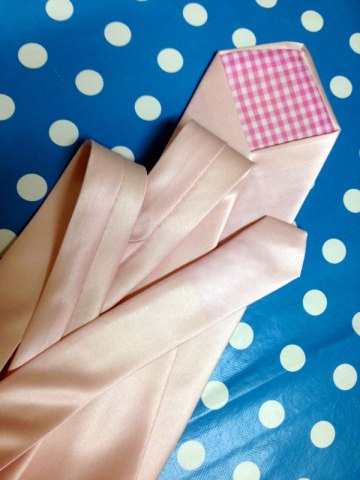 I only had a couple of evenings to research, cut and sew the tie. Sailing close to the wind, I know! So my first point of call was to all my wonderful Twitter followers. And they came up trumps immediately.

Angela from Sew Mental Mama was straight in there with a link to a FREE tie pattern and tutorial from Collette Patterns. And here’s a link to the fabulous ties she made for her son and her husband using Simplicity 1745. (wow! that pattern cover is creepy!)

Rachel from My Messings tweeted with a link to Unique Schmuck who had made one here. No hard sell on the hand sewing. In fact no sell at all. But that’s ok because I’m a weirdo and I quite like it!

And then Tom came along with some fantastic words of encouragement which gave me all the confidence I needed to get started!

Laura After Midnight confirmed it as an easy one too, so I duly printed out and pieced together the Collette tie pattern, having unpicked one of Mr Ooobop’s ties to compare. I realised that though the paper pattern was probably the best place to start, it was very slim and actually tapered differently from the ready-made one I had unpicked. Wouldn’t normally have been an issue except for one major factor. The only interlining I had was from the unpicked tie. Shops were shut and I had nothing similar in the stash, save from some white felt which, even when cut on the bias has no elasticity.

I was a bit nervous of using the existing one as a template as it was so difficult to position straight, being cut on the bias and all. It didn’t appear that it had been cut accurately to start with so I was off to a wobbly start. But after a bit of bullet biting, it was full steam ahead. 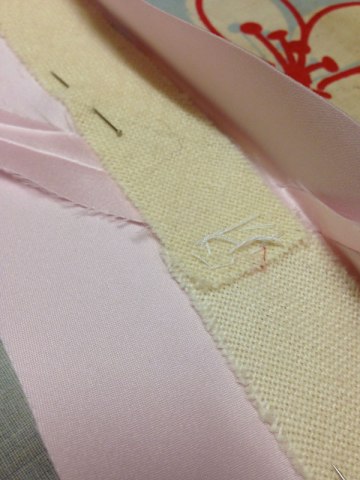 I did use the Collette Patterns instructions however. And without these I would not have achieved the point or the lining inset that was required on each end.

With no ooobop! labels at the ready I was determined to put an ooobop! slant on this otherwise very conservative tie. So I added some pink gingham lining. It made sense to make the loop in matching gingham too. There. Happy now!

Detail at back of tie

There was a fair bit of hand-stitching, it’s true. But on the whole a very satisfying project indeed. I now have a couple of hours before delivering it and seeing the gorgeous couple in all their gorgeousness.

Come back soon for the big reveal!

Is this how you tie it? Don’t judge!