The Art of Quilting

My lovely neighbour saw this publication advertised and bought two subscriptions… one for herself and one for me! I panicked at the prospect of being able to fit in a bit of quilting along with everything else, but in fact its proved to be such a lovely thing to do with Little Miss Ooobop! and it has resulted in some proper old-fashioned quality time together. She was so keen to get started and quickly decided on the cushion cover to make for her room. 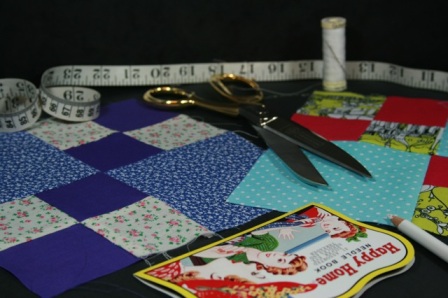 So these are our first ‘double 4 patch’ blocks. See, I didn’t even know that there were such names for different patterns, that’s how much I know about quilting! She is determined to eliminate all pink from her bedroom right now and had already hunted through the fabric stash box to find blues and purples. I am secretly happy about this because I was loving the lime green Brighton Pavillion fabric that came with the first issue! And so I am embarking on the quilt… ha ha…. the idea that I will ever finish a quilt is so funny but worth a try hey? Incidentally can you see how LMO’s block is correct and mine is quite clearly wrong? No? Oh good, well let’s move on then!

I gave LMO the option of sewing on the machine or by hand and she already had in mind that we would sit together and sew by hand. I hid my grimace as best I could but I have to say it has proved to be such a lovely thing to do together. Her stitching is so neat for a 7 year old and I love that we are both learning on the job, so to speak!

I made hundreds of little hexagons when I was around her age, some of which turned into ‘flowers’ but none of which evolved into a quilt. I think it’s quite funny that the ‘ghost of the quilting past’ has reared his pretty head again! Clearly he won’t rest until I have made one!